I’m at the first serious waypoint of a journey that started way back in March of this year. After building, programming and tweaking, I’ve arrived at the starting point for my new keyboard. Most keyboards don’t even have a starting point! You just plug them in and start to type. Not so with an Ergodox, where the layout is completely bonkers and it’s almost infinitely customisable.

The starting layout I’ve chosen is QWERTY for the alpha keys, but quite different on everything else, even compared to the default Infinity Ergodox layout. That’s the beauty (or complete insanity, if you can’t fathom moving away from the standard typewriter-inspired layout!) of keyboards like the Ergodox. Not only is the layout fully programmable, but the complete firmware (and even the compilation and build toolchain!) is open source and modifiable.

Firmwares exist that would up-end any regular notion of what keyboards should be capable of. Key presses can do so much more than just emit a single scancode. Modifiers can do multiple things instead of one. The possibilities, because the keyboard is managed by a completely open firmware on a capable microcontroller, are almost endless.

That promise is frontloaded with the most infuriating experience of my computing life so far. I can’t type. I mean, I can, because you’ll be able to read this when I’m finished, but even when I first learned to type I was never this slow and error-prone. When I first started, I didn’t have almost 30 years of ingrained muscle memory to fight against. Now, using the Ergodox is causing me physical pain and discomfort, on top of the aforementioned chronic frustration that the characters I want to type often don’t materialise when I press the keys.

I type the y character with my left hand normally on a QWERTY keyboard. It’s on the right branch of an Ergodox with QWERTY layout. I usually hit space with my left thumb, but it’s under the right hand by default. That one I can fix with a remap, but I can’t do anything about the placement of y without it not being QWERTY any more. And that’s the end game, to have learned a fully custom layout that’s probably unique to me.

Right now, though, I can’t see myself getting there before giving up in frustration, because I also need to use my computer for real work. Work with deadlines. Work that requires concentration that’s currently ruined by the cognitive load of not knowing how to type on this keyboard.

Unless I improve quite rapidly, I fear I’ll consign the Ergodox to a drawer, or maybe a mounted thing on my office wall to remind me of the failed experiment. And that’s if I manage to find a placement for it on my desk that reduces the pain in my left forearm. 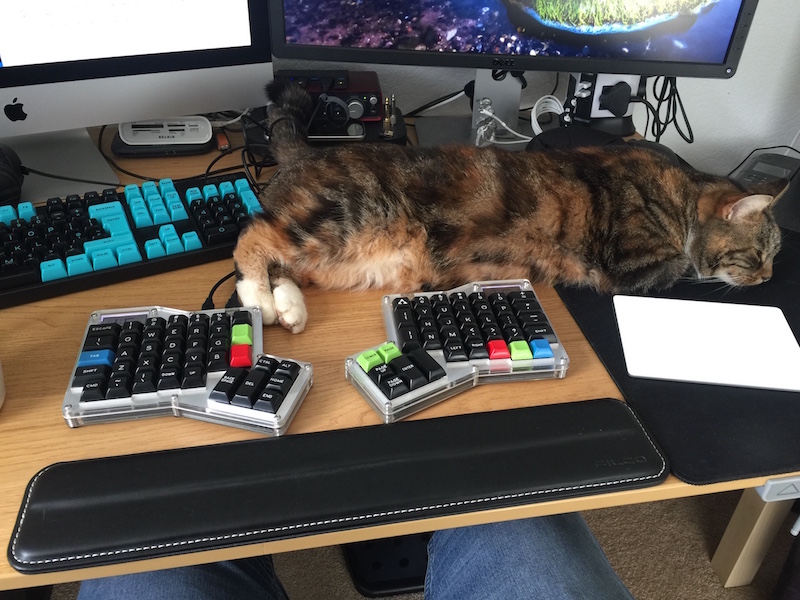